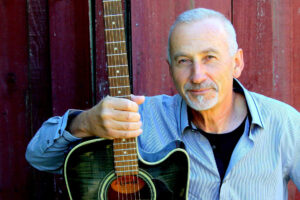 Jules Riding has travelled extensively throughout New Zealand and many countries with music ministry for more than twenty years.

He began his involvement with Christian music in 1976 with the St. Pauls Singers in Auckland, a creative itinerant church choir that wrote songs and released albums. Since that time he has written many songs used in the Songs of the Nations, Songs of the Kingdom and the New Harvest songbooks. His songs have been recorded by Scripture in Song and Maranatha Music among others. He has had three songs from ‘Kids Time 2’ selected for the SONG DISCOVERY program (USA), released Oct 2007.

He was a Primary School Teacher for five years, and a folk guitar teacher / photographer for two. He won a secular songwriting competition Unsung Heroes in 1983 which resulted in a Top 40 single ‘Round The Bays’ being released on the CBS Label (peaked at No39!)

In 1984 he released his first solo album ON THIS NIGHT, followed in 1987 by HEARTSTRINGS. Both albums won Gospel Album of the Year at the New Zealand Music Awards, equivalent to a Dove Award in the USA. Both albums were eventually released as one CD: PILGRIM IN PARADISE (the early music of Jules Riding, not a new CD).

Jules song RAY OF LIGHT (from ‘On This Night’) was a finalist in the APRA Silver Scroll Award 1985.

After a year and a half at the Orama Bible College on Great Barrier Island NZ ’86/’87, Jules went fulltime in music ministry in 1988 with a busy schedule of concerts, services and worship seminars. During this time he recorded three more albums: REVELATION (1991, Gold status 1996), HOMECOMING (1992, recorded in South Africa, Gold in 2000), and THE FISHERMAN (1994), as well as completing a World Tour, visiting 8 countries with his wife and 3 kids in 1992.

He is the author of two volumes of poetry and the ‘High Praise’ Worship Manual written for the Elkanah School of Music Ministry, which Jules founded. This school was held annually at Orama on Great Barrier Island, New Zealand 1995-98 and 2001. And in 2000, 2002 and 2004 at En Hakkore Christian Community near Ranfurly in the South Island of NZ. Part of the vision for the school was to provide an opportunity for Christian musicians and songwriters to contribute to or have an involvement with recording projects. Since the school began, Jules has released two kid’s albums, and a worship album AMAZING SACRIFICE now out of print. Students on the Worship School contributed to all 3 projects.

Jules completed his 8th album JERUSALEM. in 2001 after spending 3 weeks in Israel on Sabbatical in 1999. The album has a mildly Jewish flavour (Jules has Jewish, Canadian, German and English roots) and has his typical distinctive mellow sound, not unlike the music of James Taylor, which is the most common comparison.

Jules became a Christian in July 1975 after an ‘extensive search for truth’ through alternative religions: Hare Krishna, Scientology, Transcendental Meditation, Eastern Religions and smoking dope. He was led to faith in Christ by a Christian girlfriend Ann Driver (nee Fenton).

Jules was one of 22 songwriters from 18 nations who had a song selected for the CONCERT FOR WORLD PEACE in Rome in 2000. However, due to political reasons, the concert never went ahead.

Of the future Jules says: ‘No one knows the future except God, but I believe we are in the last days of the ‘end times’ and it is my desire to be involved in music ministry until Jesus comes back with glory and great power! The Day of the Lord seems so close.. read your newspaper and compare it with Matthew 24..’

Currently, Jules tours NZ and overseas performing Family or Outreach Concerts under the anointing of the Holy Spirit (see the ‘Itinerary’ page), and has written a book: ‘Brokenheart’ based around the 15 songs from the CD/dvd ‘Cataclysm’, which was released Nov 2010.