On 8 June 2017, ACT MP David Seymour’s private members’ bill was pulled from the ballot, starting the latest round of the euthanasia debate. It seems like only yesterday, that a bill to legalise voluntary euthanasia was withdrawn amid fears it would become a political football during an election year. Hang on, it’s an election year again!

What’s the difference between Euthanasia and Assisted Suicide?

Euthanasia is an intervention undertaken with the intention of ending a life to relieve suffering, for example, a lethal injection administered by a doctor

Assisted suicide is any act that intentionally helps another person kill themselves, for example by providing them with the means to do so, most commonly by prescribing a lethal medication

When David Seymour’s bill was drawn, National and Whanganui MP Chester Borrows said he was firmly against it [the bill].

We have a horrific record on suicide and I think it sends a message that sometimes it is okay to top yourself. And I disagree with that.

Economic Development Minister Simon Bridges said he was likely to vote against it, but may vote for it to go to a select committee so it could be properly debated. “Ultimately life is sacred and I think there are … ‘thin edge of the wedge’ arguments that concern me.”

What will that debate look like? The world has progressed since Maryan Street’s ‘End-of-Life Choice Bill’ was dropped. Views have changed and euthanasia laws in other countries have evolved over the past four years. Here’s a quick look at recent articles in the media if you want to consider the trajectory euthanasia laws have taken.

Did you read the first article in the list? Here are are some of the key points that need highlighting:

The Dutch are complacent about their famous law, he says. But there is no room for complacency. Under current legislation, euthanasia is only legal if a doctor believes that three conditions have been met: (1) the request must be voluntary and deliberate; (2) there must be unbearable suffering with no hope of improvement; and (3) there must no reasonable alternative to euthanasia. However, as euthanasia has sunk its roots deeper and deeper into Dutch medicine, the second and third conditions have shrivelled up. Patients define what is unbearable and they define what is a reasonable alternative. Unhappiness can be unbearable and a nursing home may not be a reasonable alternative. So, as one ethicist has observed, requirements (2) and (3) “add little to the requirement of a voluntary and thoughtful request”. Autonomy has trumped medicine. As a result, the number of euthanasia cases roughly tripled between 2007 and 2016, from 2000 to 6000.
One sign of the changing times is the rapid expansion of the services of the End of Life Clinic Foundation (Stichting Levenseindekliniek). This organisation offers euthanasia to patients whose own doctors have refused. They never offer to treat the underlying illness, whether it is physical or mental.
Last year, Dr Chabot points out, doctors from the End of Life Clinic each performed about one euthanasia every month. “What happens to doctors for whom a deadly injection becomes a monthly routine?” he asks. Now the End of Life Clinic is recruiting psychiatrists to service the mentally ill and demented. One obvious problem is that there is a shortage of good psychiatric help in the Netherland – which tends to take a long time have an effect, in any case – because of budget cuts.
Dr Chabot is deeply sceptical about euthanasia for the demented: “we are dealing with a morally problematic act: how do you kill someone who does not understand that he will be killed?”

How? It turns out that sometimes a relative or doctor secretly laces their food or drink with a sedative to make it easier to give them a lethal injection. In one notorious case last year, the sedative didn’t work and relatives pinned the terrified woman to the bed while the doctor gave the lethal injection. Dr Chabot was astonished to discover that “surreptitious administration of medication has previously occurred, but has never been mentioned in an annual report.”

Isn’t anyone paying attention to these developments, Dr Chabot asks.

Euthanasia is presented as a solution for those who are suffering unbearable pain, by allowing them to exercise their right to take their own life and not be forced to live with their current or progressing condition.

Is depression a medical condition?

Here’s what the New Zealand Ministry of Health says,

Depression is a mental illness.. [it] can range from being a mild illness, to a severe one – where you can lose interest in life and the things you used to enjoy.

Some of the signs of depression:

Do we condone suicide in New Zealand?

No. We actively campaign against it.

Suicidal thoughts are a key symptom of depression.

What’s Euthanasia?
Asking someone else [a physician] to intervene and take your life because you are unable to do so yourself.

“… a rose. By any other name, would smell as sweet.”
~ Romeo and Juliet, Act II Scene II

Are there other solutions to this problem?

We need to stop victimising people facing ‘unbearable pain’ or ‘extenuating circumstances’ and reach out in love.

Think differently. Look for alternative solutions and, if you can’t find one, make one!

Did you catch the story in Stuff that came out the day after the bill was pulled from the ballot?

Husband’s ingenious solution to his wife’s loss of mobility 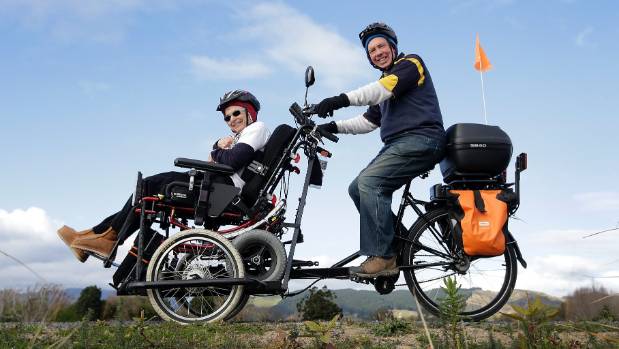 John Darnley says the first time he rolled down the street with Avis on the front of his bike, she loved it. Photo: Kevin Stent / Fairfax Media

“There was a time when visitors would come for miles just to chat with Avis Darnley.

But as Parkinson’s disease has melted away the muscles in her jaw and throat, left her in a wheelchair and stolen her ability to speak, life has got smaller.

Most days she was left with just her front room, her television, and husband John.

Until John decided it was time they both got on with living.”

John and Avis Darnley’s story demonstrates that there can be creative solutions to improving one’s quality of life.

Here’s another article, this time from the USA, about a man who takes an unconventional approach by taking care for his elderly neighbour. Their story reminds me of ‘the good Samaritan’. California Man Cares for Ailing 89-Year-Old Neighbour and Best Friend in Her Final Days: ‘Kindness Heals’.

Hospice New Zealand have a lot to say on this issue.

The Nathaniel Centre played an instrumental role during the previous attempt to legalise Euthanasia in New Zealand.

It goes without saying that Family First will play a very public role in this debate, and that Maxim Institute to provide well-researched information for the country to consider.

David Seymour’s private member’s bill is based on an illusion. It assumes that it’s possible to create safeguards around assisted suicide practices that can prevent wrongful deaths. However, international evidence has shown that there is no reliably safe way to legalise euthanasia or assisted suicide.

Examples of actions which are not euthanasia are often used to argue for law change which is euthanasia.
This brief article aims to clarify some of the terms and issues in the hope that we can prevent this from happening.