Evangelicals Around the World Celebrate 500-Year Anniversary of the Reformation

500 years after Martin Luther asserted the vital importance of Scripture in his famous 95 Theses, which became a watershed moment in the lead up to the Protestant Reformation, evangelical Christians across the world have been re-affirming the Bible’s role in Christian discipleship.

The World Evangelical Alliance (WEA) recognizes that the Reformation helped churches to re-establish core aspects of faith and personal salvation. In a meeting in Bad Blankenburg, Germany, a few hours’ drive from the home of the reformation, Wittenberg, leaders from all regions issued a statement:

While only some of our churches trace their heritage back to Luther, we are all bound together by the spirit of Reformation that desired to bring the Church back to the essence of its faith: Solus Christus, Sola Scriptura, Sola Gratia & Sola Fide – Christ alone, Scripture alone, by grace alone & by faith alone.

The message of the reformers is as relevant today as it was five hundred years ago. Therefore, we commit ourselves to prayer, asking God to continue to guide us by His Holy Spirit that through the study of Scripture, we may all be brought together in finding common faith in Jesus Christ, our God and Savior. 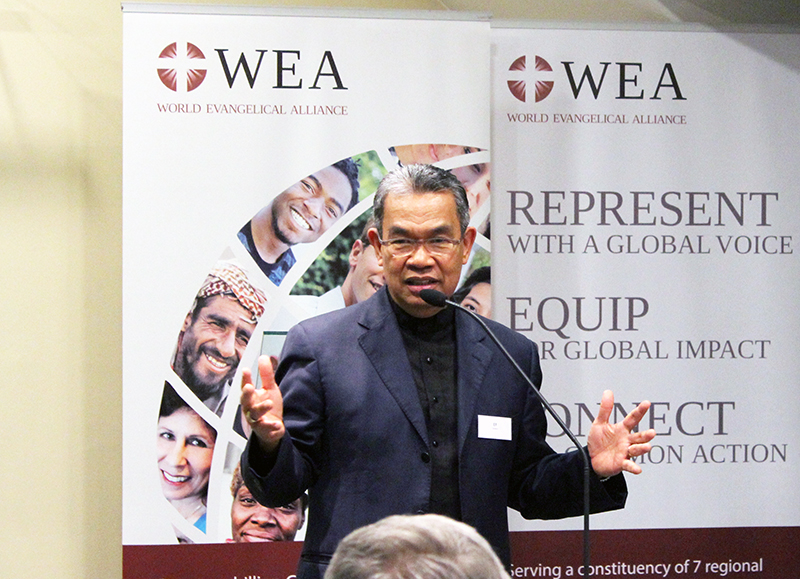 Bp Efraim Tendero, Secretary General of the WEA, speaks to WEA leaders gathered at the Allianzhaus in Bad Blankenburg, Germany, to commemorate the Reformation anniversary.

The leaders of the WEA Mission Commission have further affirmed this year that, “as we learn from the Reformation movement of the 16th century, the fact is that there is a need to again call the Church to return to Scripture; searching for answers to the key questions of the world today.”

Recognizing this need, the WEA has named Dr. Lloyd and Dahl Estrada from the Philippines as International Facilitators for Bible Engagement to promote increased and meaningful Scripture engagement in churches, beginning with evangelical Christians. This year, the Estradas are facilitating conversations in a number of Asian contexts, so that national church groups, together with like-minded partners, can develop Bible engagement strategies.

Over thirty National Evangelical Alliances in Europe and around the world have used the Reformation anniversary to focus on Scripture engagement and are holding commemoration events this month. Some have also achieved public or legal recognition, such as establishing October 31 as a public holiday for Protestants in Catholic and Orthodox majority countries, or having access for the first time to state universities to represent evangelical beliefs.

Bp Efraim Tendero, Secretary General of the WEA, who has been speaking at Reformation celebrations in several countries, including Kosovo, Albania and Germany, commented: “We are thankful to the Reformation, which is an enduring testament to how God powerfully, and in surprising ways, moves in history and through the lives of men and women, who even in immense difficulties faithfully seek to obey His will.“

“As we confront challenges in our day, which may be very different from what the Reformers faced, how can we continue to appropriate, in our lives and in our churches, the valuable lessons of the Reformation?” Bp Tendero asked, and said: “May we continue the legacy the Reformers handed down to us, especially and above all, to do all things for God’s glory alone. Soli Deo Gloria.”